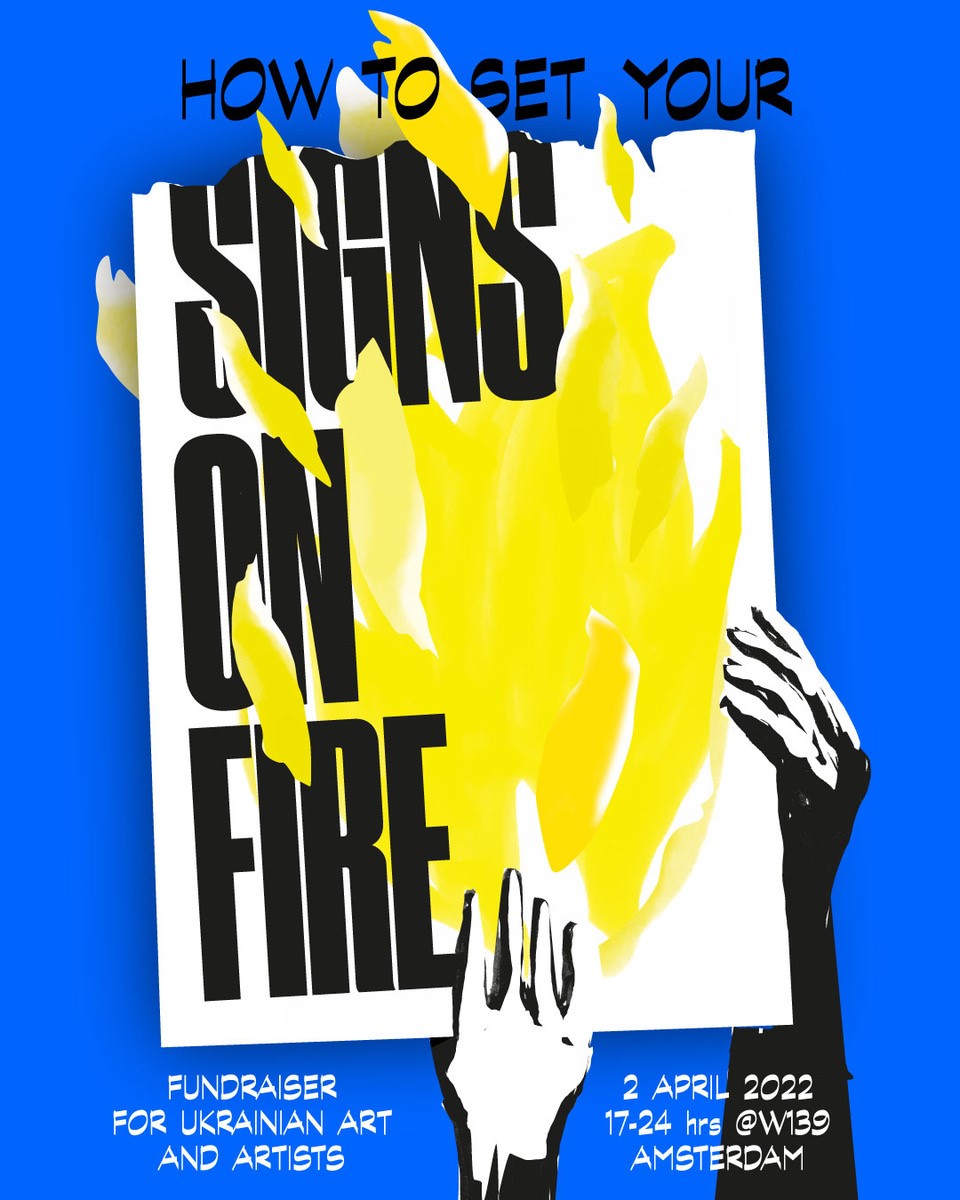 How To Set Your Signs On Fire

How To Set Your Signs On Fire

Fundraiser for Ukrainian arts and artists

On Saturday 2 April W139 will host a fundraiser initiated by Ukrainian artists to support the Ukrainian art scene. How To Set Your Signs on Fire is a mixed event with performances, interviews, DJ’s. Above all, it is a call to action to support endangered Ukrainian art and artists through protest signs and donations.

On Wednesday 23 March a museum in Mariupol containing works of the 19th-century artist Arkhip Kuindzhi was demolished. Earlier on in the war, a large collection of works by Ukrainian folk artist Maria Primachenko nearby Kyiv was destroyed, and Donetsk Regional Drama Theatre was swept away, killing hundreds of civilians who were inside seeking shelter. For Ukrainian artists Nikolay Karabinovych and Sophia Bulgakova, who are the initiators for the Fundraiser in W139, it is unbearable to witness what is happening in their home country and to see how culture is attacked. ‘Behind each artwork is the fate of a particular human being’, Nikolay says. ‘Helping Ukrainian art to survive – is a necessary effort.’

All proceeds of the fundraiser event will go to the Museum Crisis Center and the Ukrainian Emergency Art Fund. Besides music, food, and art, there will be a live (online) interview with Olha Honchar in Lviv, director of the Territory of Terror Museum about the position of art and artists in Ukraine.

The day will kick off at 13:00 hrs with a protest sign making workshop led by Ukrainian artists and activists Sophia Bulgakova, Nikolay Karabinovych, Christopher Pugmire and Valeriia Lukashenko. At 17:00 hrs this workshop hits the streets and the freshly made signs will be showcased at Dam Square in Amsterdam where the participants will raise their voice against the Russian war in Ukraine. The protest signs will be auctioned off later on.

How To Set Your Signs On Fire is initiated by Sophia Bulgakova and Nikolay Karabinovych and supported by W139, talk show Stampa, Fiber Festival, Lesley Moore, Pictoright, Open Studios and The One Minutes.

* All proceedings are gathered through the W139 bank account and transferred to the designated organisations and artists in Ukraine.

Protest sign making workshop How To Set Your Signs On Fire

Free admission, bring your own material.

Showcase How To Set Your Signs On Fire

Show your signs and raise your voice for the Ukrainian people.

Fundraiser How To Set Your Signs On Fire

Admission (donation) EUR 5 from 18:00 hrs onwards. No presale, tickets at the door.