Public Program Tournament of the Unknown

18 November, 19:00-22:00
Opening Turning Towards Fluidity: Tournament of the Unknown

During the opening this Friday, doors will be open at 19:00 and we will start at 19:30 with an introduction by artist and initiator Gabriel Fontana, curator Margarita Osipian, and our MC for the evening, Joana Cavaco. We will open the tournament with a beautiful performance by Queer Choir Amsterdam and Kexin Hao will follow with an exciting warm up that will get us ready to play Gabriel’s specially designed games. Throughout the night we’ll be accompanied by snufkin, who will be providing the soundtrack for the evening.

At 20:30 we will start with the Tournament, where you can join as a player or watch the unfolding of the games from the bleachers and cheer players on. We will play Multiform, Fluid Field, and Sonic Crosse. In Multiform, transformable uniforms are the heart of the game—disrupting the traditional aspects of the stable team. In Fluid Field, the pitch shrinks and grows into a myriad of shapes, using laser mapping techniques. In Sonic Crosse, a revised version of the traditional sport Lacrosse, specially designed rackets fitted with sensors produce a generative soundscape that centers listening as a part of play.

The evening will start with a conversation with researcher Nathanja van den Heuvel and Gabriel Fontana. During this talk, they will unpack their findings from the Multiform project and their collaborative research on sport and queer pedagogies. This will be followed by a live screening of the World Championship football match Iran vs USA. During the match, The Platform will disrupt, mediate, and obscure the competition. We will tune out the football commentary and replace it with a DJ set of two DJ’s doing a versus and playing back-to-back. Moody Mehran is an Iranian DJ and Claire Clover hails from the USA. During the DJ versus experience, there will be a live augmented visual overlay on top of the World Cup match.

The Platform, as their name alludes, wants to give platform to things that matter. They chose to host a screening of the Iran vs USA World Cup match in response and support to the ongoing revolution happing in Iran. This event is non-profit, and from every ticket 2 euro will go to NL-based, female led Iranian organization Jina Collective. — Buy your ticket here.

During this evening film program we’ll be screening three works that engage with the geo-political, technological, and spatial underpinnings of sporting cultures—bringing the power plays in, and outside, the stadium in conversation with one another. Pia Lindman’s Sports Arenas (series), 2000-2004 examines how the built environment of the stadium relates to the social interaction it is designed to contain. In The Ball, The Field, The Arena, Florian van Zandwijk takes the game of football—the biggest globalised manifestation of organised play— as a metaphor for the inseparable relationship humans have with culture, play, and our own technological developments. And Ronnie Close’s More out of Curiosity, focuses on Egypt’s fanatical football supporters, the Ultras, in their role as one of the key players in emergent political debates. — Buy your ticket here.

Join us at W139, to watch the quarter-finals of the World Cup with mediation of the game from artist and researcher Florian van Zandwijk. A football stadium is simultaneously a microcosm and a magnification of the society it stands in the middle of. Immersed in a TV-studio setup, Florian will do a pre- and post-match analysis connecting the use of technology in and around football to a wider political, societal, and cultural context. This performance-lecture will be the first manifestation of his latest research on data-collection, surveillance, media coverage, and the effects of technology within the sport of football. — Free entry.

18 December, 14:00-18:00
Closing event of Turning Towards Fluidity: Tournament of the Unknown

Three games will be played during this event: Sonic Crosse, Multiform and Anonymous Allyship. In Anonymous Allyship, the notion of anonymity creates a situation where players don’t know who belongs to their team, and explores the feeling of belonging and the ways people perform in a group. Joana Cavaco will be our MC, there will be musical accompaniment by snufkin, a performance by Kexin Hao and Queer Choir Amsterdam will close the month of tournaments with a unique performance. 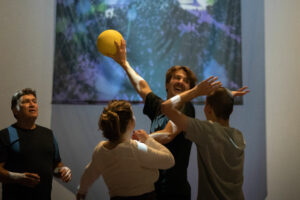 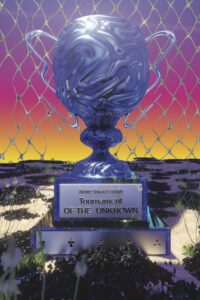