IN CONVERSATION WITH
JULIETTE LIZOTTE
ABOUT SISTERS OF THE WIND

Becoming increasingly alienated from our surroundings we could use a little practice with attunement. And so we turn to Sisters of the Wind, a mixed-media installation by French artist Juliette Lizotte (also known as jujulove). Over the past year our collective awareness has heightened about the limits of human domination, and it is increasingly difficult to feel empowered in the face of continuous human damage to the natural world. Sisters of the Wind is a timely consideration of attunement in the age of control.

From mushroom karaoke to dancing our way into a trance, jujulove created seven video works that operate as references for a communal worldbuilding effort. Her investment in its story and cinematography extended to creating its costumes, music and 3D sets, in collaboration with many befriended artists.* 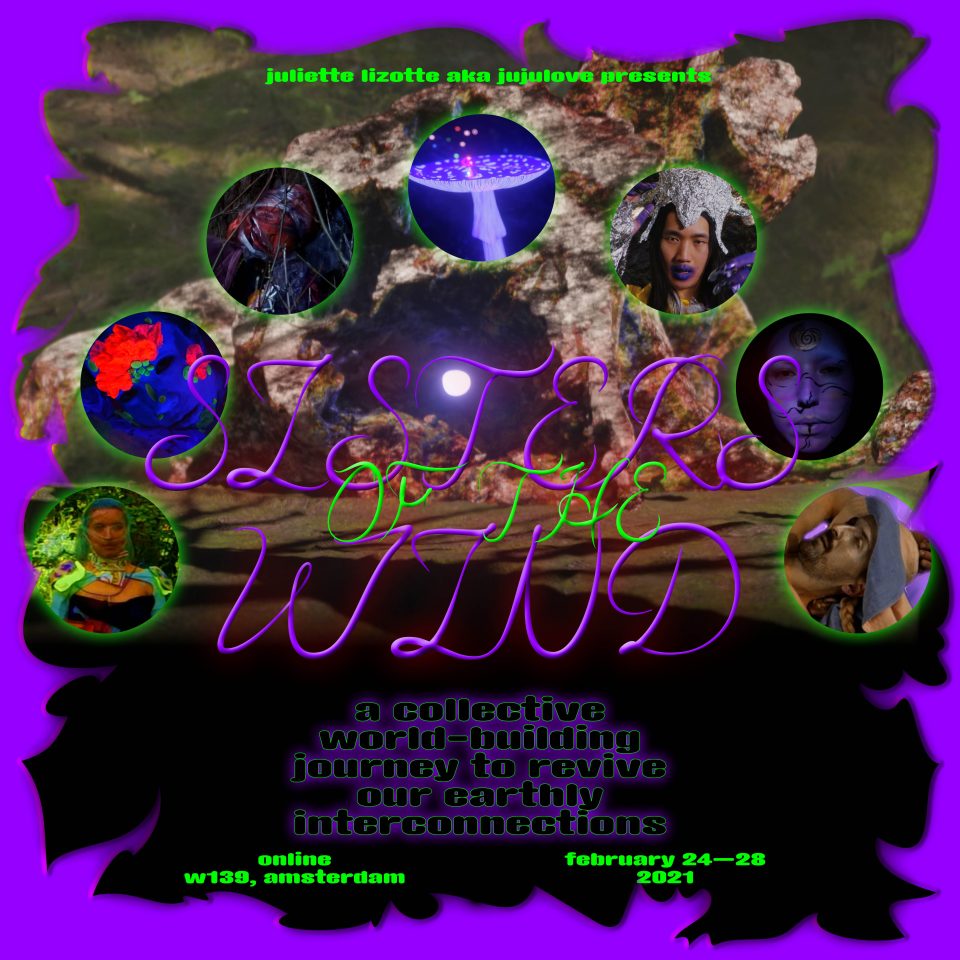 Hey Juliette, the figure of the witch has a prominent role in your work. How did you encounter the figure?

I think I’ve been interested in the witch ever since I was a child. You know how some people wanted to be a princess? I wanted to be a witch. When I started to shape my personal practice three years ago I was listening to this podcast called Sorcières and I realized the figure is also relevant for adults. Further reading work like Mona Chollet’s Sorcières: la puissance invaincue des femmes I became more aware of her rebellious character and her importance for feminist movements, especially ecofeminist thinking.

Feminist theorist Silvia Federici studied the witch as a dissident of capitalism. In that way she kind of pulled the figure out of the realm of its caricature as a costume or character in children’s stories and put her back into her nonfiction history. How has your relationship with the witch developed since you started working with her?

I actually really like to work with fantasy and science fiction. Because on the one hand yes, there is this myth, but there were also actual witch hunts. Between those two interpretations of the witch arise interesting questions such as: when is something seen as a potion or a spell, and when is something considered medicine or science? By researching the witch you discover how often women used to have really prominent roles in medicine, as midwives or as healers. And so women have power, literal power over life and death. This made them dangerous. So… I don’t know if there is a difference between the witch as a fictional or real figure, I think what is most interesting is when we question this binary.

You use fictional forms in your work such as (video) games and storytelling. How do these forms inform your opportunities to play with reality and fiction?

Often the main characters of a game or story are represented as this hero that has to fight against the world. It is like character vs. world. This is something I wanted to rethink in my work. I want to explore how you can be part of the world, instead of fighting against it. And how to do so in a collective way. Roleplay has been an important format in exploring this. I ask participants to stay close to themselves, and to incorporate their own experiences into the game. From that position we explore things like: what is an ideal world? Which elements could I put into my story that we wish would exist in the real world? And I can ask participants what they think about such elements while they are playing. Or what they learn about the world as they play with them.

Can you name an example of an element that you wish would exist in the real world?

In the world I am creating there is this strong wind that comes and goes. The wind is an external power that we often see as a ‘bad’ power because it can destroy things. But the community in my world also uses the wind, to cast spells for instance. I find inspiration in recognizing this type of power in life and attuning to it. The community works with the wind, listens to it, recognizes its power and trusts it. Life is attuned to the world, even if the world provides forces that can be hostile.

You mention a community that you address as ‘sisters’, could you tell something about how you think about this term?

I propose to embody members of a community where the feminine spirit dominates but all gender expressions are celebrated and welcomed, they are witches and consider everyone and everything around them as their sister. So not biological, blood sisters, but imagining an animistic sisterhood mindset. I don’t know how such a way of life would actually be if it would be the mainstream one, but I think it’s a very powerful exercise to try to change our perspective and imagine how this could be and how this would change us and the world around us.

How have you been able to structure these social, magical and metaphysical questions in your project? We encounter videos, roleplay, your music production and a story—how do they interact?

I created a framework for this story to unfold as a collective experience, I set the mood, I facilitate. Live Action Role Play (LARP) inspired me to use a non linear narrative. Because participants contribute with their own stories, there is not necessarily one beginning or one end. Different aspects such as the videos and music give it a structure but they don’t make it linear. So there is space for dreams and flashbacks, plot twists and diverging plots, because the story should belong to everyone participating. So as different iterations of the story are happening it slowly becomes something else, I need to attune to that and embrace that I am not in full control anymore!